Is life still good in Manchester? by Susan Jones 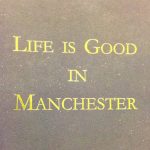 Twenty years ago, cheap housing, readily-available studios and a supportive regional arts board were the ingredients that when combined, enabled Manchester’s artists to make creative mileage for themselves and their city.

My research considers how the cultural climate and arts policies respond to the needs and motivations of artists pursuing their practices and livelihoods. By examining the past conditions that enabled artists’ practices to flourish and hearing from artists whether life in the city and North West region is ‘good’ for artists, my aim is to make propositions for future policy scenarios for support to artists.

Limitations in the physical and policy conditions that enable artistic practice to flourish are detrimental, not only to the artists’ career development and livelihoods, but to achieving the strong sense of place and distinctive cultural sector that forms one of the ambitions for a devolved Manchester.

The Manchester of two decades ago was assessed to be a good place to be an artist: the physical conditions were right. Property was cheap, big open-plan studios could be rented in city-centre. There was easy access to timber yards, light-industrial expertise for art fabrication and scrap materials and plentiful casual work for artists. With an underdeveloped arts infrastructure – it was compared then with 60s New York – Manchester had plenty of slack in the system for the artist-led DIY culture to move into.

Imagine a cold evening in 1997 when 50 young people were gathered in a flat in Chorlton. Described by The Annual Programme, it was ‘a lively scene: beer flows, the conversation by turns earnest and ridiculous, babies wail, people fall over’. This isn’t just another house party, but launch of a series of site-specific art works in artists’ houses. Commissioned by artists Martin Vincent and Nick Crowe (aka The Annual Programme), artists’ homes – the bathrooms, basements and underfloor spaces – became temporary galleries. The rationale for focusing solely on artists living in a particular place was twofold: it would raise awareness within Manchester of what could be done and expose what was happening in the city to the outside world.

By 1999, artists’ initiative MART had raised £100,000 from the A4E (Arts for Everyone) lottery fund for a ‘Festival of visual art made in Manchester’; a month-long, city-wide programme of artists’ projects, exhibitions and workshops. Although well-known for popular music and club land, TV and theatre, design and technology, science, industry and innovation and its sporting prowess the stuff of legends, these artists identified the missing ingredient as: ‘the visual arts, for many the benchmark of cultural production, goes largely unnoticed’ (The Mart Group, A4E application, March 1998).

Soon after, the “progressive” North West Arts Board announced three-year funding to artist-led initiatives, paving the way for RALP (Regional Arts Lottery Programme) funding for artists’ groups of up to £100,000 a year for three years.  Thus, alongside good physical conditions, policy conditions also became favourable to artists’ practices and ambitions.

So, in a devolved political climate, what are the new arguments waiting to be made to policymakers about the value of, and modes for, supporting artists’ practices through arts policy?

My literature review revealed some of the sticking points to sustaining artists’ livelihoods. Thirty years ago, artists could make a living from sales and commissions as a main occupation, or a dual career that often combined art practice with part-time art school teaching. Within the creative industries, however, it’s common for artists to hold down three, or even four short-term projects at once, alongside other jobs taken on to cover the gaps. The wider the portfolio, the less artists earn. Getting on as an artist is dependent on “network sociality”. Gender, ethnicity and socio economic class have all been found to impact adversely on who gets to work in the arts. Creative industries work doesn’t suit everyone’s characteristics and behaviours: not all artists are outgoing and entrepreneurial by nature.

The review also identified a lack within policy development of in-depth knowledge about the “wealth of differences” in the motives, intentions and attitudes of artists as they evolve livelihoods through their practices over a life-cycle. By conducting sequential interviews with a sample of artists in North West England and identifying the desirable conditions and contexts, my research aims to excavate a new rationale for the interrelationship between artists and arts policy in future, identifying the supportive policy interventions that sustain livelihoods and make life “good”, both for artists and the places in which they live.

A researcher on contemporary visual arts, Susan Jones has a specialist knowledge of artists’ practices, livelihoods, careers and employment patterns and particular interest in how artist-led and socially-engaged practices impact on arts ecologies and cultural value. She contributed to Warwick University’s Cultural Values Initiative (2013) and CMS Inquiry into the Market for Art (2006). As Director of a-n The Artists Information Company (until 2014), she instigated the Paying artists advocacy campaign. Her research into the interrelationship between arts policies and artists’ livelihoods through a PhD at Manchester School of Art, Manchester Metropolitan University aims to inform future public policy for support to artists.