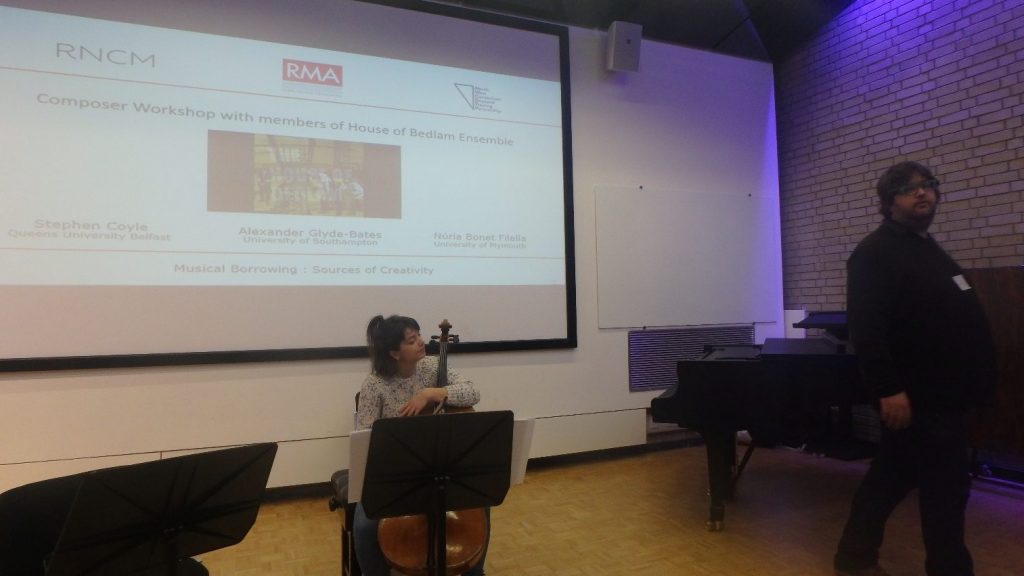 Musical Borrowing: Sources of Creativity – A Training Day for Composers (By Mark Dyer)

A Training Day for Composers

In conjunction with the Claude Debussy in 2018: a Centenary Celebration Conference at the Royal Northern College of Music, I was involved in organising an RMA (Royal Musical Association) Training Day for composers in March. The theme of this training day was Musical Borrowing: the use of existing music within a new composition.

Musical Borrowing is an age-old tradition, with its roots in the formation of Western music as we know it today. From medieval and renaissance composers incorporating existing chant into their new settings of the mass, to Mozart using the theme of Twinkle Twinkle Little Star as a basis for variations, to British composer Michael Finnissy’s palimpsest approach to completing Mozart’s unfinished Requiem Mass, musical borrowing has been an ever-present practice. With this training day, aimed at composers who currently employ musical borrowing, we wanted to ask ‘What does it mean to borrow existing music in the 21st Century?’ At a time when any musical score and recording can be retrieved from the internet within seconds, and issues of copyright and ownership becoming ever more slippery, what does it now mean to say something using someone else’s words?

The day was in three parts. To start, PGR composers were invited to present their own uses of musical borrowing, ranging from the use of Rossini’s William Tell overture to communicate the effects of climate change, to the use of a Debussy piano piece as the basis and stimulus for jazz improvisation. This session was chaired by Dr Larry Goves, who very neatly connected strands from the differing practices and continued to question the ‘material’ that was being borrowed.

The second session comprised of academics involved in the Debussy Conference presenting creative ways in which they had carried out source-based work. After all, in musical borrowing, the existing material forms a source with which the composer must understand and respond to. This session was chaired by composer-musicologist Dr Fabrice Fitch, who was able to insightfully tie together the themes raised for the composers within the audience. It was interesting to note the differing opinions between musicologists and composers regarding ownership, consent and intent. Generally speaking, the musicologists were comfortable in reworking Debussy’s music if it somehow served him as the creator, whereas the composers admitted a certain amount of friction felt when two artist voices converge and resist one another in the creation of a new work. 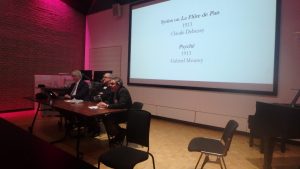 The day ended with a Performer Workshop for Composers, for which we received funding from the NWC DTP Cohort Development Fund. Leading up to the training day, we put out a call for composers to draft a new composition incorporating musical borrowing for flute and/or ‘cello, which was then workshopped on the day by members of the new music ensemble House of Bedlam. The funding received from the DTP allowed us to recruit professional musicians to workshop the outputs of current doctoral composers engaged in artistic research. This experience is vital to the creative process, as the tacit knowledge and feedback received from performers and other composers can consolidate existing practice, as well as develop completely new avenues to explore. 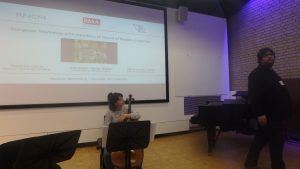 We received a solo cello piece from Stephen Coyle, a composer currently undertaking a PhD at Queens University Belfast, in which he had transcribed his own improvisations on the piano for the ‘cello. This raised interesting questions relating back to the issue of ‘material’, as well as avenues for musical notation that might hint towards improvisatory origins, and playing techniques on the ‘cello that might mimic the piano.

Additionally, we received a piece for ‘cello and additional performer from Alexander Glyde-Bates, a composer nearing completion of a PhD at the University of Southampton. In this piece, Alex explores simultaneous representations of the Prelude from Bach’s Cello Suite No. 1. The cello part from the Bach is played as standard alongside, for instance, the narrated names of the pitches, the name of the chord, or the interval class number. This leads to a fantastically bizarre performance, whereby the spoken elements begin to actually sound like the Bach!

Thirdly, we received a piece from Núria Bonet at Plymouth University, who incorporated Ricard Viladesau’s Alt Emporda by in a sketch for flute and ‘cello. The conversation quickly developed into ways that Nuria might use the instruments to mimic the idiosyncrasies of the amateur recording from which she had borrowed the material. As a composer who usually works with computer-generated sounds and methods, Nuria admitted how useful it was to receive feedback from performers and composers alike.

We concluded the day with a reading of my own piece Momento for Kathryn by flautist Kathryn Williams. The work is a single-breath piece that includes the opening flute solo from Debussy’s Prélude à l’après-midi d’un faune, as well as excerpts from conversations between Kathryn and myself. The Debussy solo has a specific emotional significance for Kathryn, and the piece attempts to reflect upon this. In this instance, we spoke as a group how musical borrowing might go beyond Debussy and beyond the flute even.

Perhaps musical borrowing as a practice can gain renewed poignancy as a way of documenting very personal relationships with and experiences of pieces of existing music.