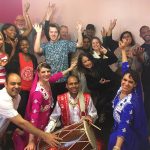 ‘Bringing the major northern economies together might help bridge gaps, but it may be difficult for smaller regions, cities, and towns, each with distinct individual identities, to band together into one cohesive unit; the distance is not only physical, but also cultural’ (Nesta, 2016).

Manchester – a city of communities, an organic whole that constitutes a series of connected-but-distinctive, large-but-local economies, which once helped create the conditions for the industrial revolution – is today helping to drive progress on devolution. For such a multicultural city, the application of the concept of devolution in arts and cultural activities could arguably be the best investment for local growth. It would mean that the local consumers could potentially become the producers, and thus be in control of the products that they produce and consume. These small creative cycles could continuously discover and nurture grass-root talents and skills; provide help that responds to local needs; fully understand the infrastructure requirements of their diverse communities and provide local decision-makers with up-to-date, accurate, and meaningful information. This devolution mentality has been extrapolated into many different contexts, but specifically I will be highlighting an exciting practical approach recently developed by Manchester International Festival (MIF).

With both the ambition and the financial capacity to lead the way, MIF – the world’s first international festival of original, new work and special events – has established a new community strand called MyFestival. Through this scheme, MIF encourages ordinary Manchester residents to explore the themes of arts and cultures through participation in regular networking activities, special events and skills workshops provided at no charge. Amongst MyFestival initiatives is Festival in My House (FIMH) – a project that I am fortunate to be part of. MIF invites local residents to present the arts and cultures that exist within their communities, turning individual ideas into micro-international festivals hosted in their own homes. The selected proposals are then commissioned and realised into FIMH with support from the MIF team.

In November 2016, I curated and developed M8 Festival – a FIMH Trailblazer. M8 represents the postcode for Cheetham Hill and its surrounding areas and is also a play on the word ‘mate’. The festival invited neighbours and friends to immerse themselves in different forms of social dance, music, and food. We welcomed guests, selected from various demographics in Manchester, to experience, not just the activities, but also our everyday spaces and places. In a very similar vein to how MIF had entrusted me with curating and developing the festival, the concept and attitude of devolution was applied to my M8 Festival in the way I delegated the opportunity of hosting parts of the event to some of my neighbours, in their own homes. I found that sharing certain roles with people who were more adapted to specific traditions or customs produced a stronger result than if I had procured each type of the arts and cultures by myself. This not only produced a more accurate representation of the ethnically diverse Cheetham Hill, but it meant the community-led aspect of the project was enhanced, and my main aims of connecting my guests to each other, to new environments, and to new experiences were fulfilled.

As many of the most important initiatives on devolution are now coming from local communities themselves, this FIMH ‘assets approach’, which invites ideas from the people instead of trying to impose or offer solutions, demonstrates the fundamental shifts in MIF’s thinking. Through this new strand, the festival has taken the social responsibility of engaging with the marginalised geographies and forgotten communities; not only aiming to connect them with the arts, cultural, and creative sectors at both local and international levels, but also, simultaneously addressing inequalities. This community-led project is an effort to have MIF truly represent the more obscure, less conventional groups of ‘community of interest’ in Manchester.

Devolution needs to not only go wider, but deeper too. Hence, we need arts and cultural policy and spending that focuses investment on ‘people’, ‘ideas’, and ‘activities’, rather than flagship buildings. Ideas and activities based on people’s participation such as FIMH would bring new audiences into arts, cultural, and creative sectors, which could in turn provide means for more ‘inclusive growth’. Ultimately, this would then form ecosystems that could act as fundamental drivers of the wellbeing of the city regions.

Yatie Aziz is in her fourth year of Doctoral research at Manchester Metropolitan University, entitled ‘Landscapes of Identity’, which aims to develop a model for ‘mapping the place identity of a transcultural locale’. She is currently conducting her fieldwork, gathering and analysing qualitative and quantitative data from her case study site – Cheetham Hill District Centre, Manchester.